It’s the middle of summer, and for many of us that brings back fond memories of summer camp. Learning to paddle a canoe, roasting marshmallows over a campfire, slapping mosquitoes on endless walks through the woods, and for some… learning to use power tools.

Of course, camp these days can mean many things, with options ranging from traditional out-in-nature camps to urban sports-themed or creative arts options. But power tools? Saskatchewan Polytechnic’s Brittany Grimsdale says, “Absolutely!” Grimsdale heads up Women in Trades and Technology (WITT), which offers a variety of trade and technology-themed summer programs for youth. With nearly 30 summer camp seasons under its belt, it seems WITT must be on to something.

A plumber by trade, the WITT program head shares her skills with girls ranging from 12-15 years at the Saskatoon GETT camp, where, she says, opening minds to opportunities is a focus, “Studies show that before girls hit high school is really the time to share the opportunities available in terms of careers.” Adds Grimsdale, “Maybe they’ve never thought of a trade before. Trades are not often thought of as a first-choice career for girls. Whether or not they go into trades later in life, it’s a chance for them to gain some skills and gain confidence.”

That’s exactly how Saskatoon camper Nevaeh Moore experienced GETT. At 13, she was this year’s youngest girl in the week-long camp, and she came away with some new skills and the handiwork to show for it. “We got to come up with our own design for a table and build it,” explains Moore. “Mine is rounded on the edge on one side and stained with dark stain. It’s in my bedroom now for makeup and hairbrushes.” The grade 8 student had some experience with tools, having helped her mom in the past, but at GETT she got to try new things and improve on what she already knew. “Now I know how to design a table that stands up and works. The table legs were a challenge. I had to take my table apart and put it back together three times! I learned how to use a level, right angle and measuring tape.”

Moore’s mom Amy saw a change in her daughter’s confidence by the end of the week. “It was a cool opportunity for Nevaeh to tinker with some tools and make a useful object. The empowerment of being able to create something independently was great to see.”

GETT’s girls-only focus is part of what contributes to that confidence building, says instructor Robin Reynolds, who teaches the carpentry portion of the Saskatoon camp. “All our instructors are women, that makes a difference,” she explains. Reynolds describes the camps as a safe place for teen girls to try something new. “It’s a really a supportive environment. They’re among peers that are at the same skill level so its less intimidating.” The journeyperson carpenter has been an instructor at camp for six seasons and it’s clear she also gets something from the experience. “It’s been a blessing to be part of it,” says Reynolds. “I love seeing how proud the girls are of themselves. It’s a nice atmosphere. It has also become a community at the instructor level, and I really value that.”

The Regina and Saskatoon camps vary slightly in activity, but both offer a hands-on experience and exposure to career choices not traditionally thought of as options for women. Both camps have a strong carpentry focus—an area most campers really enjoy because they can build something to take home. This year, Saskatoon campers had some plumbing instruction, a visit from a firefighter and spent a morning learning about robotics. In Regina, campers learned some computer coding and built robots, and had a visit from Rose Santos, an electrical engineer from camp title sponsor SaskPower.

SaskPower has been the GETT camps’ title sponsor for several years, providing funding and guest speakers. In addition, the Crown corporation sponsors four seats (two in each city) that WITT filled through the Big Brothers/Big Sisters organization. “SaskPower has been great to work with. We use pallets for lumber, and this year when they were hard to come by, SaskPower sent us a whole crate from their shipping department,” says Grimsdale.

"It was incredible to see SaskPower involved in this program, and to help Saskatchewan girls explore career possibilities in Trades and Technology," says Rose Santos, project portfolio manager, Distribution Construction at SaskPower. "In the early 1900s, Saskatchewan women couldn’t vote, so we’ve come a long way. It’s exciting to be a part of the evolution of this journey!"

Reflecting back on this summer’s camps, Grimsdale talks about the range of girls the camps appeal to. Some are there to learn skills for a hobby. Others are more serious and quite focussed. Grimsdale describes a camper who brought a pen and paper and furiously scribbled notes about everything she could glean from her instructors. “She wants to learn how to renovate and flip houses and is actively seeking skills that will help her prepare for that.”

Others, like Moore, who hopes to become an orthopedic surgeon, want to try new things and have fun. Most teens fall somewhere in the middle, and don’t yet know what life has in store for them. Regina camper Rycelle Amurao perhaps sums it up best, saying, “I had a really great time at the camp. Even though I might not take a job in any of these subjects, I don’t feel like I wasted any time. I had fun learning about the different types of trades. I feel like it helped me learn new things and gave me new job opportunities to consider.”

GETT campers vary in age and focus, but they often end up being a tight-knit group by the end of the week. Moore went to the camp by herself but came away with a few friends who she’s keeping in touch with. “Two girls had done the camp before so got to do some more advanced stuff,” she says. “I might do it again.”

“We do see repeat campers,” says Grimsdale. “Even more amazing is that mothers who took the camp years ago are now sending their daughters. GETT is now old enough we have alumni parents!” Regina Blue Seal carpenter Patricia Fayant, who has been instructing WITT camps since the 1990s, was one of three instructors this year with a special connection to a camp participant. “My granddaughter attended, and two other instructors had a daughter and niece join.” Fayant, who is Métis, enjoys instructing the camp and being a face for Indigenous women in trades so much that she plans her contract work around it. “It’s a really positive experience and one of my favourite weeks of summer.”

For more information about Women in Trades and Technology, including summer camp programming, visit our WITT Programs and Events page. 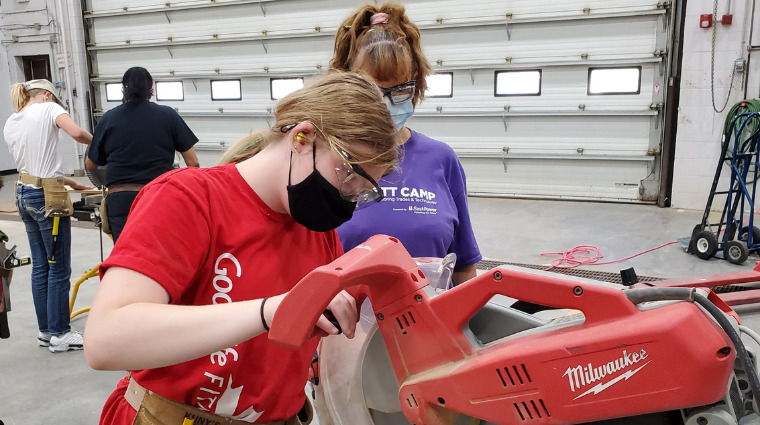 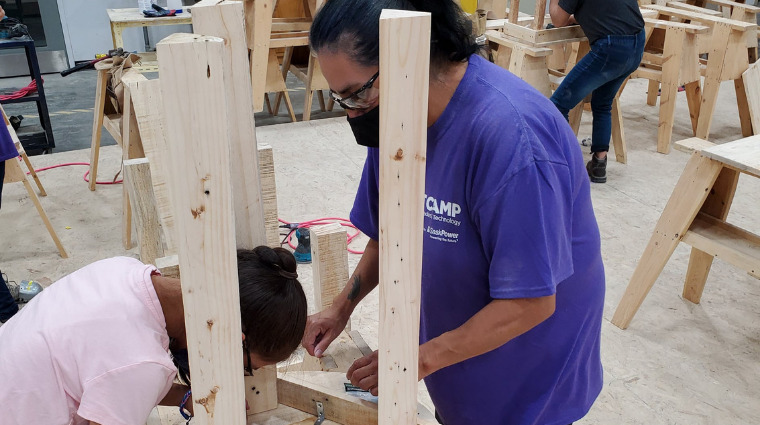 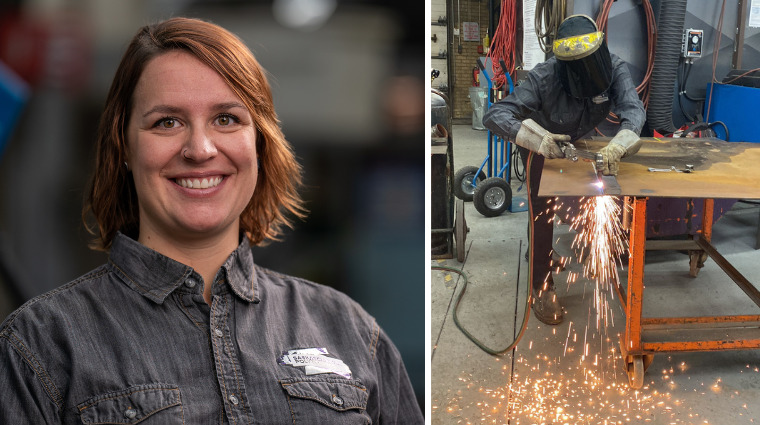 Women in Trades and Technology hits the road
January 5, 2023 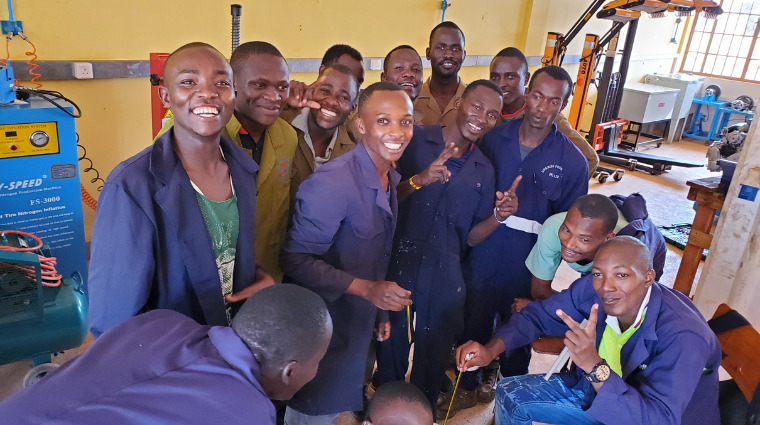 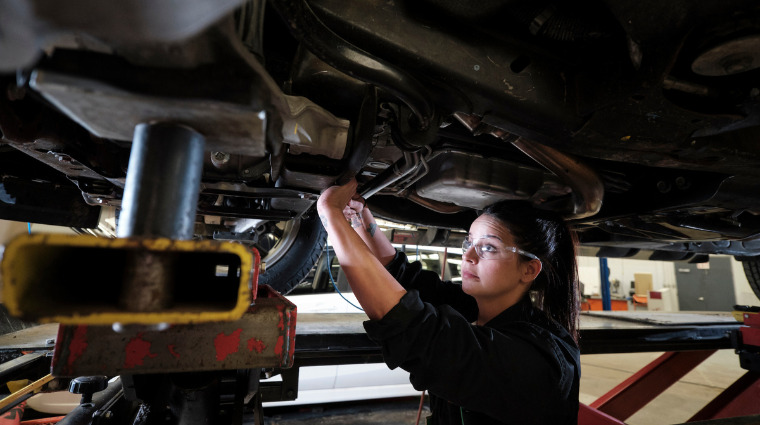 How WITT is supporting women to succeed in under-represented careers
December 9, 2022